Several weeks have passed and there has been silence, maybe whispers, but mostly silence. So, what has been happening then? Well, not much really, apart from I have had to make a regretably decision to sell my Commodore 64 Mastertronic collection. I could go into detail about it, but I'd rather not bore with the reasons why. Perhaps some may have seen this coming? Money is always the thing, isn't it? Oh! Space and time as well! Let us not go all sci-fi and get down to the photo and YouTube video of the collection in all it's glory! 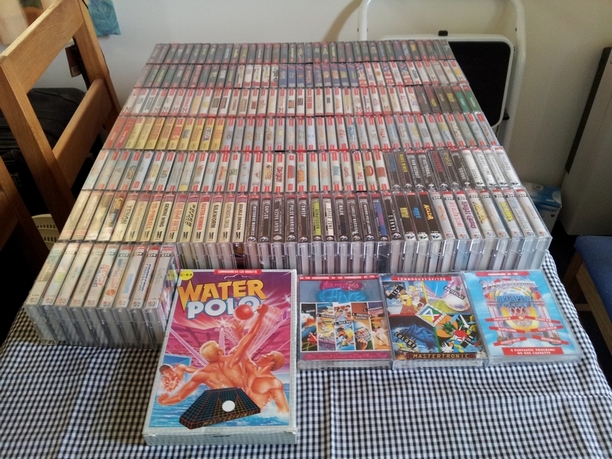 This has to be a first, a photo of all the Mastertronic Tapes laid out nicely on a table. It took about two hours to haul them all off the shelf they were placed on and put them back. But it was also nice to see them all out and together in one place. So, now we come to the YouTube video ...


Collecting the Mastertronic Tapes has been a real joy and I don't every regret doing so, but there comes a time or a scenario that makes decisions like this difficult. This *whole* collection is on eBay for those that are interested and may want to have the chance to bid on it.

I would personally like to thank all those that have followed me during this All Things Mastertronic Blog and helped me out during the process.

Whoa ! A few weeks have passed again and there doesn't seemed to have been much activity. But with only a few titles left, it is quieter than normal waiting for them to pop-up or not in some cases. So, here's to the lonely one in this batch ... 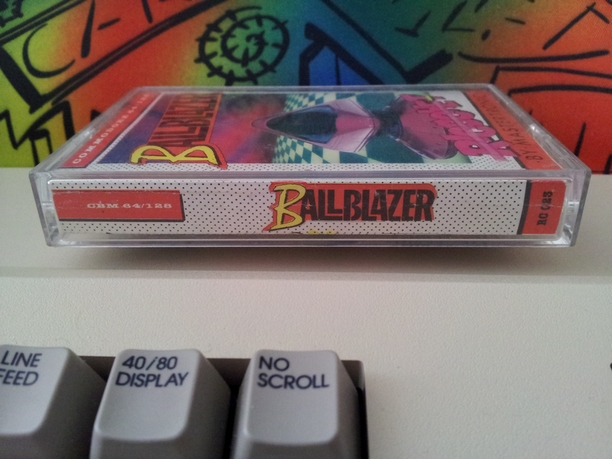 To score is the aim of this game Ballblazer, originally by Lucasfilm / Activision. A short played, but memorable title played by myself. The unforgettable music, which has been remixed by none other than Romeo Knight, legendary to the demo scene for many tunes, including Red Sectors - Cebit'90 demo. Title track called - " Cream of the Earth ". Well worth a load and play.

Creeping ever-so slowly to the finish ...

I have seen the remaining titles on other platforms like, ZX Spectrum and Amstrad, but as yet not on the Commodore 64. So, the wait could be a long one !

If anyone has seen or has spare copies of these games, please let me know. Many thanks !
Posted by Alex Aris at 4:39 AM 2 comments:

So, when was the last time you played it like there was no tomorrow ? A game is a game and although I don't play many of the games that are around today, I certainly played a fair few back in the day. Well, that was a number of years ago, but it was fun then and still is now. Here's to retro computing !

Here we have three titles that have come my way, including two that I missed an opportunity to get at an earlier date ... 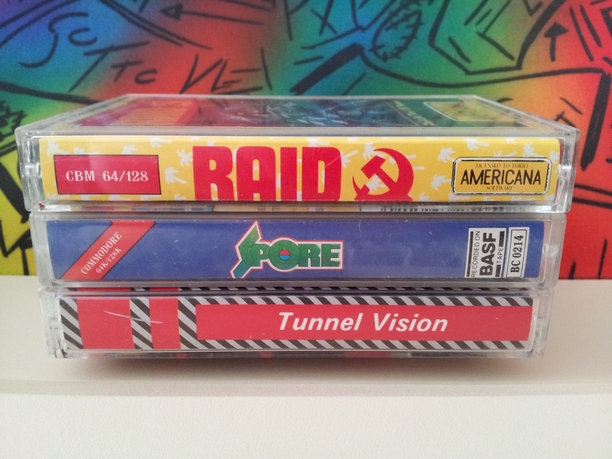 We all know Raid Over Moscow, in this instance it has been called Raid. It is still the same game, but with a slightly shortened name. This is another classic game by Bruce Carver of Access Software. Spore and Tunnel Vision two titles that I don't remember playing. Spore is quite a perculiar game, but with a fair modest David Whittaker title tune and sound effects. Whilst Tunnel Vision has a classic piece of music " Bach - Toccata in D Minor " and some speech " Attention - Get Ready ". The game isn't too bad and I quite like the 3D Tunnel effect in the game. Worth a look !

So, how many are left to get now ?

I can't believe it is a month since my last blog entry, but we do have six rare titles from a collecting point of view, one of which was kindly found and offered to me as a trade. Also, don't be alarmed with the difference in photo sizes, I recently upgraded my HTC Desire for a Samsung Galaxy S2 on Android. A still, very functionable phone, but with better memory and extra features. 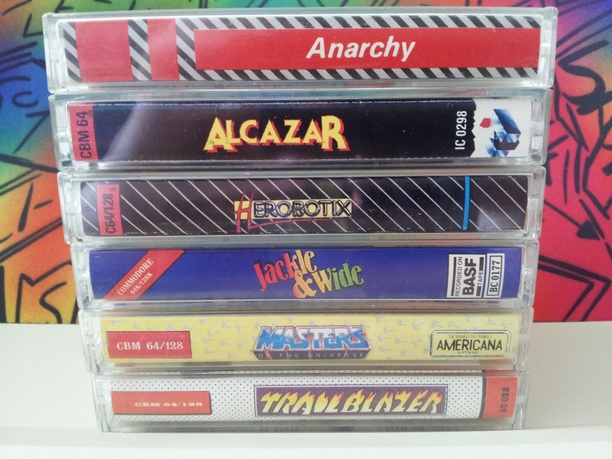 So, a nice mix arcade adventure, shoot'em up and a little bit of strategy with this bunch. Three of the most known titles for me where, Anarchy, Herobotix and Trailblazer. Although, I think Trailblazer was played more than anything by me and also, great re-release programmed by Shaun Southern of Mr. Chip Software fame. This title was kindly found and offered to me by Mat Corne from the great blog / vlog - " Mastertronic Chronicles ". Mat also kindly pointed out, that Alcazar was on the Mastertronic Label and not Americana or Ricochet. At the point of 13 titles listed on my last blog entry, it was difficult to judge then what sub-label it could have been on. But now we know !

Americana ::
Masters of the Universe

Rack It ::
Anarchy and Herobotix

Now there are only seven titles left to collect and I wonder how many of these will be easy to get ?

I have seen a few of these titles on other formats / systems, e.g. Amstrad and ZX Spectrum. Both Spore and Raid have appeared in bundles on eBay, but were unfortunately not obtained due to being outbid on or sold out on an online store. I have never seen a copy of 5 A Side Soccer on tape, but there is a disk version on the Mastertronic label through eBay from the United States. I wonder ?

It is Friday and it's good ! Quite literally ... " Good Friday " and after a bit of a pause, I am back with another title for the collection. At this point in time SlayRadio - " The home of Commodore 64 remixes and original SID's " is playing in the background. I do like listening to other what most people would call, normal music. But basically, Computer music is my favourite. Even the Atari Pokey chip has become a good bit of aural stimulation as well. 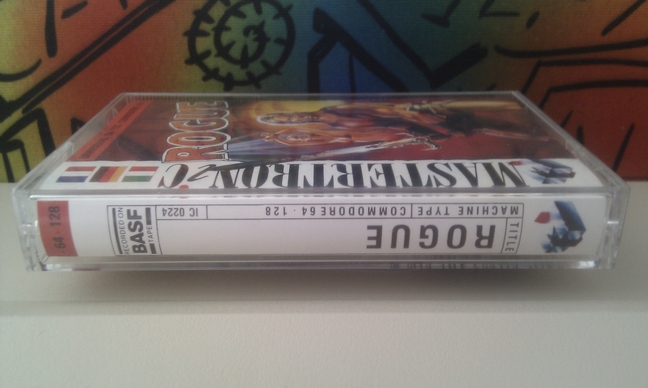 So, Rogue, a Gauntlet type of game with nice graphics and unsual game makes it worth a look. A quick load time as well, 55 counters ( 2m 45s ). I am not really a fan of these types of games, but certainly gives you some form of strategy whilst play it.

Okay ! So my collection is almost ( sort of ) complete, just a few more titles to go.

Here is a list of the ones I have left to collect :

Let us hope that these titles are out there, somewhere ...

Who would have of known it ? There was me thinking that I'd never come across a copy of this title and then suddenly it appeared in a bundle on eBay. You may have read one of my earlier posts where I had a theory, but now this proves copies are still out there. 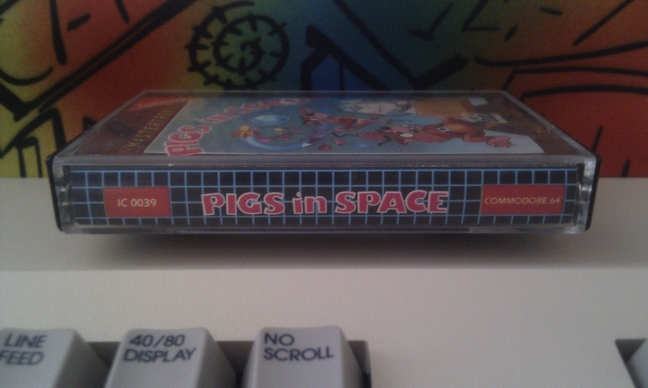 Pigs might fly, but they are still around in this sense of the word with Pigs in Space. As it stands, I am fairly certain that this version is not in the Commodore 64 archives. Not even as a .TAP file for use with Emulators. What makes this version unique, is the Turbo Loader and the first or front section with the Mastertronic logo, also with David and Richard Darlings pixel handwriting.

The above YouTube video shows me loading Pigs in Space and having a little game, which isn't spectactular, but funny at the same time. The overall load time is farily quick and under two minutes. 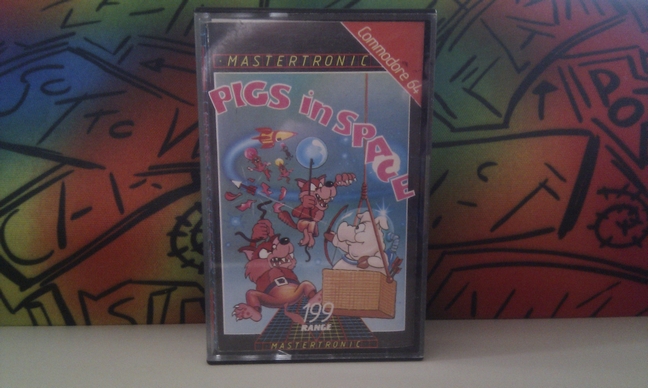 I had been looking around for Pigs in Space for over six months and luckily now, I have it. So, with this title, it completes my Blue Gridded 199 Range of Mastertronic games. I hope to get a Photo or perhaps even a video of these for my next blog post.
Mastertronic ::
Pigs in Space
Fellow collectors ::
It isn't just me out there, no ! We have a small band of fellow collectors of Mastertronic Titles and over the last few weeks, I have had requests for a Master list of titles. For the next blog post, I will place a link for this list, so anyone can download it and know what titles to collect.
I would also like to mention the Mastertronic Chronicles Blog hosted by Mat Corne, which not only notes what titles he is collecting, but it also contains some great gameplay videos so you can see a chosen title in action.
If there other collectors of Mastertronic titles out there who would a mention about there blog or website, just let me know.
Until the next time ...
Posted by Alex Aris at 7:06 AM 4 comments:

Batch 37 : It's rare, but definitely not the Last Ninja !

Today weather forecast is, definitely warmer than of late and with no surprise snow flurry like last weekend. I am generally glad somethings are starting to look up and it looks like I have found another rare one, well for a Mastertronic sub-label that is. Even if the original version is still out there ! 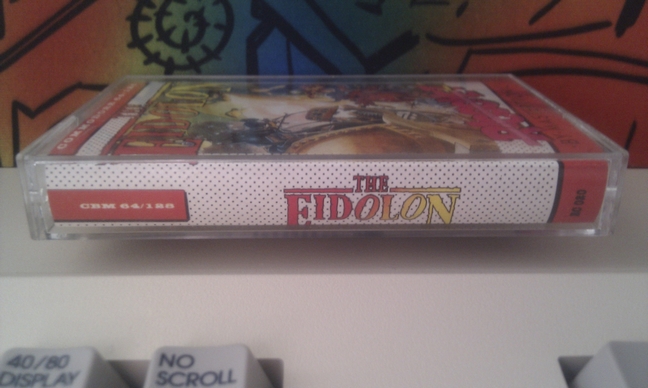 A strange, but fairly addictive ... The Eidolon first published by Lucasfilm Games ( Activision ) ! This 3D maze, shoot'em up certainly keeps you wondering and on your toes. Loading from Tape is a little bit of a bind, but the Disk version certainly makes up for a lot. Well worth a look, especially when the Dragons appear !

Well, it's not the Last Ninja, but worth a play and quite similar to the Commodore 64 version. Collect energy, Shuriken Stars and give the enemy a taste of your martial arts and away you go. 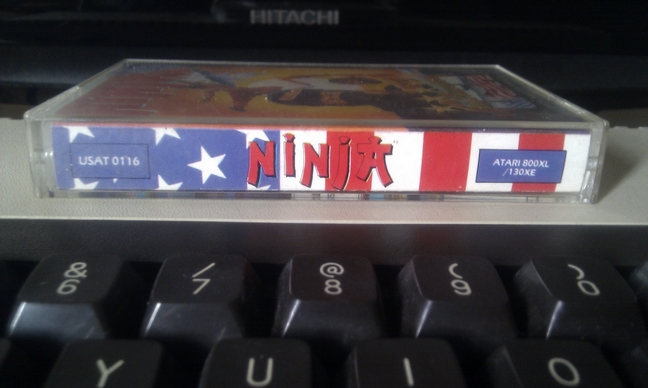 Another thing that makes Ninja on the Atari especially good, is the music, as it's composed by Rob Hubbard. It's always nice to hear his renditions on other platforms.

The pace of collecting All Things Mastertronic may have slowed up, but the eyes and ears are still looking out there !