Do you remember the Muppets and the sketch mini-series called - " Pigs in Space " ? Well, this really hasn't got anything to do with it, unless you truly want it to be !

" Pigs in Space " is a game that appears to have been released by Mastertronic in April 1984. Although, at a first glance, it does bear the uncanny resemblence of Pooyan from Datasoft.

Pigs in Space from Mastertronic 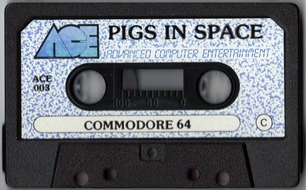 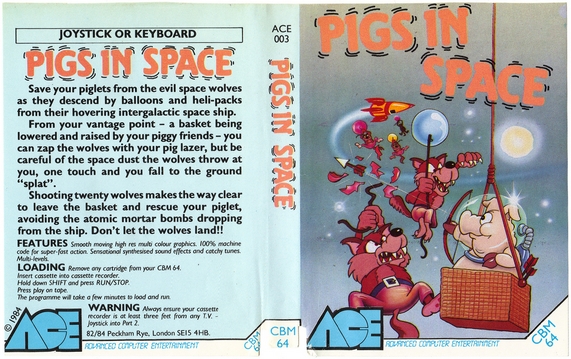 ACE - Pigs in Space ( Inlay )
I personally haven't seen a single copy of Pigs in Space by Mastertronic and to be honest I didn't and partly don't, actually believe that it exists. There is some guessing that back in 1984, the Mastertronic game was pulled due to it being too similar as Pooyan. A bit like Great Giana Sisters being the same as Super Mario or Mario. Now, if the game did actually exist, it would be in the Commodore Game Archives wouldn't it ? There is some form of evidence that game does exist, but in a form of a Photo : 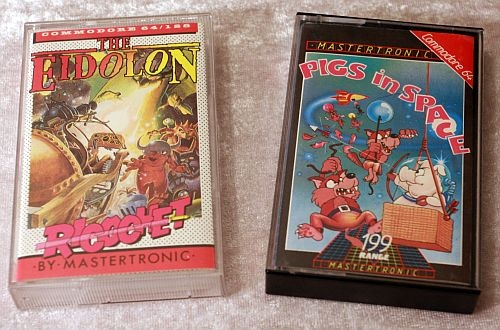 The above Photo was sourced from the following Lemon 64 Forum :
[ http://www.lemon64.com/forum/viewtopic.php?p=434056&sid=41b43a31c3e1203adb820a88d3ba6187 ]
If this is the official Mastertronic release, it should carry the hallmarks of the Loader similar to the ACE version of Pigs in Space :

Instead of the ACE logo, it would have the Mastertronic one. Also, more than likely with a good hunch of the programmers being, Richard and David Darling. The wonder boys responsible for some of the earlier Mastertronic games, then moving onto Codemasters.
For something even more spooky or strange, take a look at the ACE Inlay and then the Mastertronic one. They are pretty much the same, now we know that a company called Words and Pictures did all the Inlay artwork for Mastertronic, but which one came first ? ACE or Mastertronic ?
Pigs in Space could be labelled as one of the worst games ever, but if the original Mastertronic version appeared on eBay with proof of it's authenticity, either a video of it running or some documention ... I bet it would sell for an obscene amount of money ! Not so long ago, there was a rare copy of a game called - " Danse Macabre " for the Commodore 64 on Disk that sold on eBay for 550 EUR ( £490 ). It had never appeared in the Public Domain, but now it suddenly has !
Coming soon ... Pending delivery ... Batch 12 !
Posted by Alex Aris at 2:37 PM